The Future of Bookbinding: An Interview with Priscilla Spitler

Priscilla in her studio in NM (photo courtesy of Priscilla)

The Future of Bookbinding in the 21st Century, from a Veteran of the Guild: An Interview with Priscilla Spitler
by Pamela Train Leutz


When I joined the Guild, fresh out of the London College of Printing in 1981, my assessor, Bernard Middleton, said in our one-on-one interview that what is most important is community. He wanted to know what I was going to do with the skills [I developed during my training] once I got back to the United States. He stressed keeping in touch with community, and the Guild of Book Workers was my lifeline to bookbinding in New Mexico. I was in the middle of the high desert with a few people like Pamela Smith who was at the Press of the Palace of the Governors Museum. There was also Mina Yamashita who was my first bookbinding teacher [before London]. She had been a calligrapher-designer at Hallmark Cards in Kansas City and she had the idea of starting a book arts festival at the Museum. We selfishly had this book arts program to bring people to us. We invited guests from afar. Claire Van Vliet came one year.

When I joined the Guild, I was one of the newbies, 26 or 27 years old. There were members I remember calling the grand dames of the Guild: Mary Schlosser, Margaret Johnson, Signa Houghteling, Jean Stephenson. I looked up to them. I realize now that I am probably the age now, in my 60s, that they were then when I joined the Guild. It makes me think of the future of our organization and what has transpired since that time in the early 80’s. I ended up in Austin, Texas doing a master class with James Brockman, and then was hired by Craig Jensen, where I had the opportunity to work with him and Gary Frost during those magical years at BookLab for eight years, from 1987 – 1995. There was such activity in the book arts there in Austin. That was the era of the [Guild] Chapters. I was a co-founder of the Lone Star Chapter of the Guild, along with Mary Baughman, who has now started the Book Arts Center in Austin, since her retirement in 2015 [from the Harry Ransom Center at University of Texas]. That was the heyday of the chapters opening up. You were seeing the Lone Star Chapter, the Rocky Mountain Chapter; the California Chapter joined the northern and southern groups of California; there was the Southeast Chapter that opened up during that era, based out of Alabama and the book arts program there. And there were the old chapters, like New England and Midwest. It was a really active period in the Guild.

I was one of the last of a generation of Guild members that actually went to Europe to study. We didn’t have the opportunities [to study here in the States] in the 70’s. Unless you were able to find a European binder here in the states, you went to England or Ascona, Switzerland, or Germany or France or Belgium or Paris. You got your skills there and came back to the States. I can remember attending the international bookbinding conference in Brighton, England in 1984, New Horizons in Bookbinding. I was asked to speak on a panel, representing the U.S., on why I went to Europe to study. There weren’t any opportunities here, in my opinion, unless you went into a library program, and even those were sparse. But since then, and even at that conference, they were looking to the States for the future, that the States would be the place to keep our craft going.

[In Europe] I have seen schools close, programs close - even the London College of Printing has changed its emphasis and gone more into book arts and film. One by one in Europe, the programs have closed. We do have the opportunities here in the States. We have the Center for the Book, the earliest one in New York, and then Minneapolis, and now Austin, TX. We have programs like [Master of Fine Arts in the Book Arts] at University of Alabama, and master classes in Portland, Oregon’s School of Arts and Crafts. And we’ve got wonderful programs like North Bennet Street School. I can’t tell you how thrilling it is to go to a meeting and see all these young people coming out the program at North Bennet Street, the American Academy of Bookbinding, and University of Alabama. These are young people that are excited about the craft like I was. Having just taught this workshop here in Denver there were only two familiar faces in the class, Pam Leutz and Karen Jones, long time members of the Guild. The rest were all new faces. We had our introductions and heard of their backgrounds and their reasons for pursuing book arts. It may have been that they were calligraphers wanting to learn to house their craft; many said they had gone to the Center for the Book in San Francisco and took classes, or they went to American Academy of Bookbinding or they went to the North Bennet Street School, taking workshops here and there. It’s keeping our craft alive and vital, though maybe the emphasis has changed.

The Guild membership used to be mostly bookbinders and fine binders in the early days, and it’s shifting. We saw this in the beginning of the 21st century with the Guild’s In Flight exhibit in 2003 - I was chair of exhibitions and Laura Wait was my co-chair. I made many trips to Denver then, helping organize this show, which opened at the Denver Public Library. The In Flight show was probably the last show when actual books were [physically] entered for the jurors to see. The theme that we chose – In Flight –  had such a broad interpretation, that it was flooded with book arts. I think that was the first exhibit that had book arts or artist books. Out of 100 entries we had about 10 or 12 fine bindings. It went to different chapters – they hosted the shows.  It traveled for a couple years. I think that was the turning point in the Guild when we started seeing the excitement of new technology. We saw ink jet-printed texts – original texts, non-traditional bindings, accordions, flip books. We saw unusual box-making as a book arts form, expressed with three dimensional pieces, and it was an exciting time. We also learned it was such a job in dealing with these books. Members of the Rocky Mountain Chapter in Denver had to help pack up the books that were not accepted. That was a huge job. I had tried to devise a jury form, where jurors could individually rate each book. They were all anonymous. We had to cut [the entries] down to half. Maybe that wasn’t so popular in the end when those whose books weren’t accepted got feedback, though I would have liked feedback. I had a book not accepted in the 2000 show, and I wanted to know why.

Peter Verheyen took on the role [as exhibit chair] again after serving in the role in the 90’s, and after that Karen Hanmer took over. In the 21st century we’ve seen new technology coming in - we’re using digital printing; we no longer have to rely on letterpress work. Even the letterpress printers are now using computer generated type through photo polymer plates. They’re not using the lead type so much.

As an edition binder winding down my production business, I hope to just concentrate on my art bindings and my fine bindings, at this stage in my life. What I’m seeing, and what concerns me is the materials that we use. The quality, the demand for fine leathers, fine papers, bookboards. The nature of the work is changing. The costs are very expensive. We have to balance that as production people, and as artists. We are dealing with the high cost of shipping materials. But with other venues through the internet like Etsy and Facebook pages – people are using those like websites now - you can be in a little town nowhere and have your bookbinding craft or business. I think that is really encouraging. And there are other sources of funding, like GoFundMe.com. It will be exciting to see how we as small craft people can survive in the 21st century and be inventive. We’re making our own paper; we may have to learn how to make our own tools. We’ve seen Jim Croft, who lives out in the wild, who tans leather and makes bone folders. We may need to be more resourceful and more local-community oriented to keep this craft going. But on the flip side, it is a global community. It’s changing, but I believe and I’m hopeful that the craft is going to continue. I see hope in the young people who are joining the Guild.

The community part is such a big deal. I love bookbinding; I love working with my hands; but I think it is community that is so important to me. It’s helped me to meet interesting people and made my life interesting.

Oh, I would totally agree with that. My choice - for whatever reason it was that I ended up on this path to choose to go study bookbinding - it was a lightbulb moment. This makes sense to me. It combines all my interests. It has been a life that exposed me to the most interesting clients, whether writers or artists, and to students that have flocked to me who want to learn how to bind their books, that love handmade books. Since I started teaching more actively in the 90’s and 2000s, I tried to teach one semester in an academic setting, but it wasn’t for me. I didn’t want to have to grade students. I found a different kind of student in that situation. In a workshop where a student really wants to be there, and there is not such competition for grades, it’s sheer joy. I know it’s a struggle for some students – there is always that student in the class that needs maybe more attention - but still, the enthusiasm and excitement keeps me going. I love that exchange. And at this point in my life, in my 60s now, it’s my turn. I need to pay it forward by giving back and sharing what I know and keep the craft going. I believe it is important in this decade of my life to be passing that on. Now that I’m beginning to wind down my business, maybe I can finally turn to [writing] my various manuals to leave behind.

I was really encouraged with the group that was in the workshop this past weekend. They were all so enthusiastic and are interested in getting together to continue working on projects. I think we started building a community.

In New Mexico, a study group has been getting together and are working through Karen Hanmer’s latest manual, Contemporary Paper Bindings. It’s a really great thing to do. For me, I’m overjoyed when I can see students go back, especially with the handouts I labor over, and make another book, and send me a picture of what they’ve done. That’s the most rewarding thing to me. 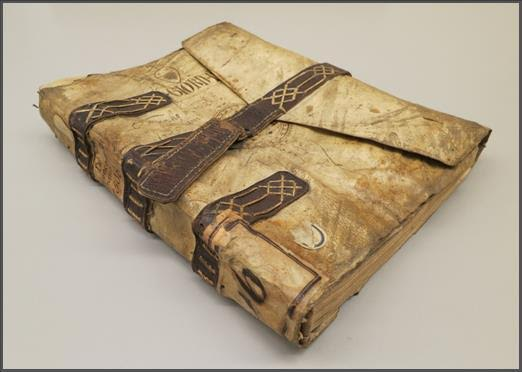